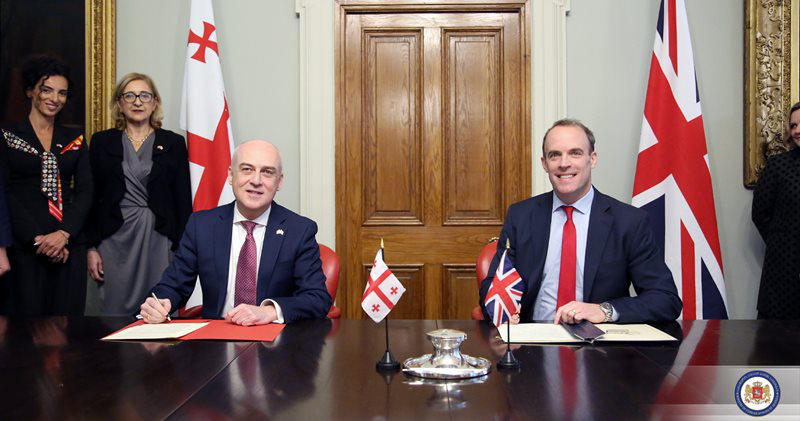 Georgian Foreign Minister David Zalkaliani and UK Foreign Secretary Dominic Raab have today signed an agreement between the UK and Georgia to ensure that our trade and political relationship remains strong after we leave the EU, the UK Embassy to Tbilisi announced on Monday.

The deal - formally known as the UK-Georgia Strategic Partnership and Cooperation Agreement - is the first continuity trade agreement between the UK and an Eastern European country.

It replicates the comprehensive market access for trade in goods and services the UK is party to under the EU agreement, further strengthening the trading relationship between the UK and Georgia

Trading under the terms outlined in the agreement, rather than on World Trade Organization terms, will ensure British businesses and consumers benefit from continued preferential access to Georgia after the UK leaves the European Union

“The signing of this agreement gives British exporters and consumers the certainty they need to continue trading freely with Georgia, as the UK prepares to leave the EU. It underlines the significance of our strong ties with Georgia and will ensure that our political and trade relationship continues to flourish,” Dominic Raab said.

“The UK Government is committed to developing both our political and trading relationship with Georgia.

This agreement will ensure minimal disruption for businesses and consumers in both our countries as we prepare to leave the EU and usher in a new phase of cooperation between our two nations,” International Trade Secretary Liz Truss said.

“The signing of the Strategic Partnership and Cooperation Agreement between Georgia and the United Kingdom of Great Britain and Northern Ireland will further foster our bilateral cooperation, which has its roots running deep in history and which has been brought to a particularly high level by the UK-Georgia Wardrop Strategic Dialogue. Partnership between two countries is based upon shared values and common interests, including in promoting rules-based international order, security and stability,” Foreign Minister of Georgia David Zalkaliani said.

As well as setting out comprehensive free trade arrangements, the new deal frames how our countries will work together in the future. It highlights the UK’s support for Georgia’s sovereignty and territorial integrity, as well as both countries’ commitment to strengthening fundamental freedoms and human rights and deepening our security relationship.

The agreement pledges that we will continue our cooperation in areas such as financial services, education, transport, industry and environmental protection. It also recognises Georgia’s strong commitment to an ambitious reform agenda in key areas such as governance, economic reform, trade and security policy.