Bidzina Ivanishvili : Europe is tolerance and diversity and we boldly and proudly declare that we are Europeans 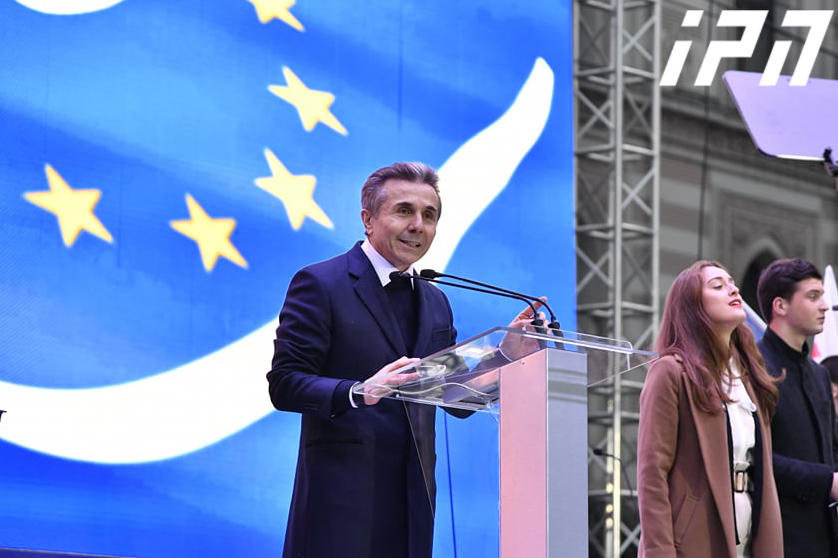 “Europe is tolerance and diversity. We, the nation that organically shares these values and possesses a continuous culture that spans numerous centuries, boldly and proudly declare that we are Europeans, and we will not return to the great family of Europe empty-handed,” Bidzina Ivanishvili, the Chairman of the ruling Georgian Dream party said during his speech in Freedom Square.

He noted Georgia is not returning back to Europe empty-handed.

“Seven years have passed since the most unprecedentedly populous gathering in the history of Georgia, when half a million citizens gathered here, on this very square!

On this square, which bears the name of freedom.

Seven years ago on this square, we – practically the entire country – came together precisely to restore freedom and dignity!

And today, we are once again united at the same place by our unconditional commitment to the European choice!

What does Europe mean to us?

Europe primarily is the democracy that was conceived in ancient Greece, "righteous justice," and a Christian soul;

Europe is tolerance and diversity.

We, the nation that organically shares these values and possesses a continuous culture that spans numerous centuries, boldly and proudly declare that we are Europeans, and we will not return to the great family of Europe empty-handed.

Georgia is the civilization of The Knight in the Panther's Skin, where the acceptance of that which is foreign and the coexistence of different cultures is a part of our identity, rather than something that has been established through declarations.

Christianity was brought to us by Nino of Cappadocia, who was joined by the Armenian Shushanik, the Arab Abo, and the Persian Eustathius.

Georgia is the homeland of wine and, most likely, of wheat as well, since it was precisely us that Greece, the first European civilization, named as "Georgia," or the country of agriculture; it is precisely a Kartvelian tribe, the Chalybes, that are linked with the first production of iron; it is precisely in our country and nowhere else that Jason arrived in order to obtain the Golden Fleece, or the sacred knowledge of the Georgians.

Among us, "the cub was equal to the lion" from the outset and this is what made us Europeans in the first place.

As early as in the 12th century, we were first in Europe to make a woman king, we conceived the first signs of parliamentarianism, and it was precisely in Georgia that Shota Rustaveli rocked the cradle of European humanism for the first time.

Powerful regional centers of European education such as the academies of Gelati and Ikalto emerged here, on our land, from the roots of the Kolkheti Academy.

Later on, historical whirlwinds separated us from our common family; however, just as a well-raised person retains his or her dignity in any environment, so our nation has been able to retain its European culture and values.

And even when there was no hope to be found, Sulkhan-Saba was still stubbornly yearning westward, while creating Europe in Georgia with his Sitkvis Kona.

It is precisely this nature, these values that make each and every Georgian European, and Georgia a natural part of Europe! “ Bidzina Ivanishvili said.