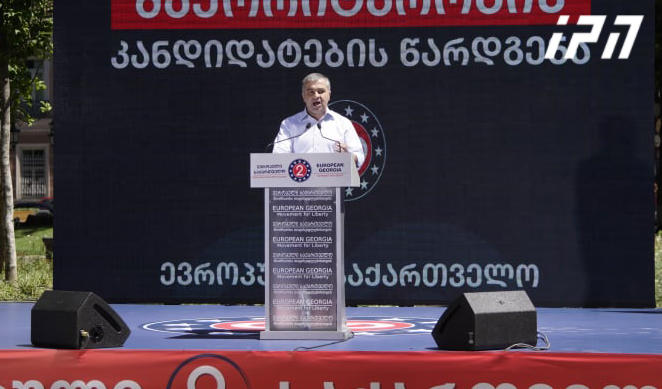 The leader of European Georgia, Davit Bakradze, stated that the party promises the voters welfare, protection and western integration.

As Bakradze noted during the presentation of the majoritarian candidates, his party will fight for the "European Dream".

"Why's the October election important? Because, today, Georgia is a rich government's poor country. Georgia is governed by an oligarch who doesn't understand and concern the grievances of the people.

Georgia's governed by the government which spends more and more year by year for its comfort and luxury. Georgia's governed by the authorities which are immersed in nepotism corruption and shares. This is their Georgia, their Georgia is in the glass palace, in corruption and crime. However, there is another Georgia that has a lot of problems, poverty, hopelessness. We should save such Georgia in the October elections. This is a fight for every family's welfare. European Georgia's main promise is - welfare, protection and integration with the west", - stated Bakradze.

Bakradze also stated that in order to increase welfare, the party will decrease the taxes which, according to him, will save the businesses.

"We'll save 2000 GEL for every family by decreases the taxes", - stressed Bakradze.