Tamar Gabunia: AstraZeneca has already had a similar reaction - out of 5 million cases, there were 41 cases of anaphylactic side effects 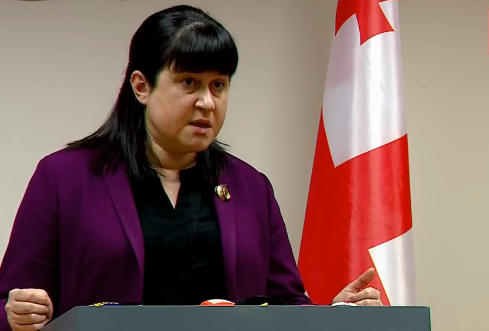 AstraZeneca vaccine has a similar side effect already included in its potential side effects. Out of 5 million cases, there were 41 cases of anaphylactic side effects, - said the Deputy Minister of Health, Tamar Gabunia in connection with the incident at the "Imedi" clinic in Akhaltsikhe.

According to the Deputy Minister, until the case is investigated, a group of experts will discuss whether to stop the vaccination process for a certain period of time.

"By default, when there is an supposed side reaction, based on expert assessment, if it is a severe side reaction - and in this case, we are dealing with a severe side reaction, because it caused hospitalization and the need for resuscitation treatment - in this case, an expert group will discuss whether to suspend the vaccination process for a certain time of period before the case is examined. However, I would like to point out here that AstraZeneca vaccine has a similar side effect already included in its potential side effects. Out of 5 million cases, there were 41 anaphylactic-type side effects. In this case, it is too early to talk about what we are dealing with, whether it is anaphylactic-type or another side effect, experts will study it. According to the British data, 41 out of 5 million were anaphylactic-type side effects, so this is one of the known reactions and the vaccination has not stopped in any country because of that, but we will wait for the expert opinion and then we will make a decision", - Gabunia said.

According to her, it will not take much time to study the case.