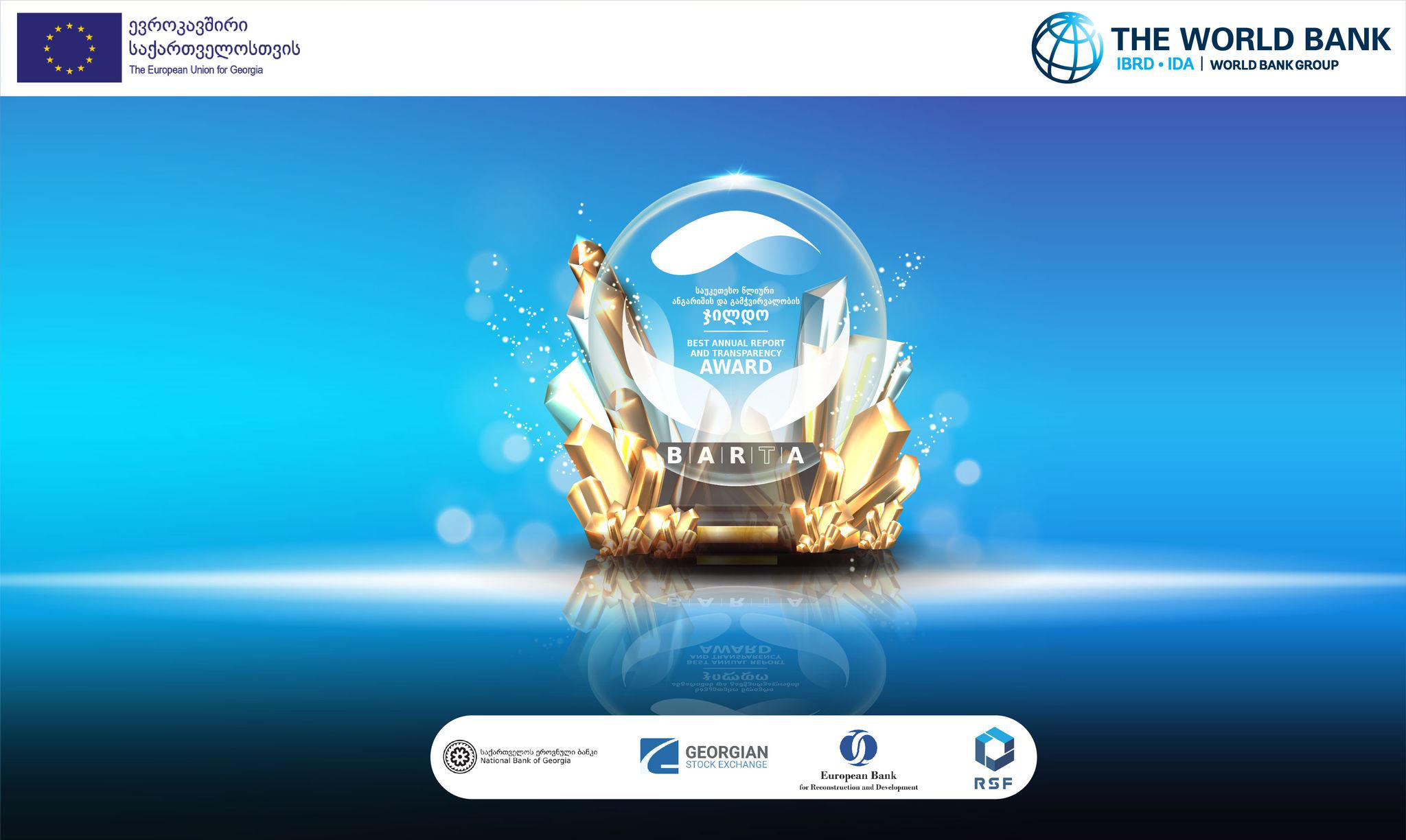 The Best Annual Report and Transparency Award (BARTA) ceremony was held today in Tbilisi, the third occasion for celebration of this award since its establishment under the joint World Bank and European Union project - Georgia Financial Inclusion and Accountability, in partnership with the National Reforms Support Foundation in Accounting, Reporting and Auditing (RSF), reports World Bank.

According to World Bank, BARTA, first launched in December 2019, is part of a concerted effort to address challenges in the quality and transparency of corporate reporting of Georgian companies. Following the enactment of Georgia’s new Law on Accounting, Reporting and Auditing in 2016, this annual award is intended to encourage compliance with new reporting regulations, foster healthy competition between companies, and improve the overall standard of corporate reporting as part of the country’s quest to build up investor trust and confidence at local and international levels.

As it becomes know, in addition to non-financial reporting awards, this year’s BARTA will reflect the emergence of sustainability reporting and introduce a new award – for the Best Sustainability Report, as part of BARTA’s gradual evolution and recognition of global trends. This year, honorary awards were added to each category of awards: Large Financial Institutions, Large Non-financial Institutions, and Small and Medium Companies.

"The European Union is very happy to see the family of ‘trusted companies’ in Georgia growing. With a new focus on sustainability, we hope to see even more companies reporting better, more reliable information about sustainability – both in terms of their impact on people and the environment, as well as the impact of possible risks to the company and climate risks. All of this is good for business and investors and Georgia's economic development," said Sigrid Brettel, Head of Cooperation of the European Union Delegation to Georgia.

According to World Bank, The award ceremony 2021 showcased 18 nominated companies, and was presided over by a distinguished international panel of judges. The selection process was conducted using a robust methodology that emphasized, among other things, the provision of non-financial information which addresses intangible assets such as brand, customer reputation, know-how and goodwill that drive corporate value.

“Company transparency and quality reporting remain important foundations for Georgia’s economic development and, as such, constitutes an integral part of Georgia’s ongoing reforms aimed at joining the European family,” said Sebastian Molineus, World Bank Regional Director for the South Caucasus. “I am extremely pleased to see BARTA growing and evolving in-step with global trends and best practices in financial and non-financial reporting. Further improving transparency and boosting the business climate will help Georgia become even more attractive to investors”.

The winners in each of 7 award nominations announced this year, are as follows:

“The transition to a sustainable economy demands that Georgian companies not only comply with current reporting regulations, which were greatly enhanced with the enactment of the Law of Georgia on Accounting, Reporting and Auditing in 2016, but also emulate trends in best reporting practices in the EU and globally. BARTA encourages this and awards those companies showing exemplary reporting,” said Giorgi Tabuashvili, Executive Chairman of RSF.

According to World Bank, this year the BARTA competition was open to all public interest entities (PIEs), which includes all A and B listing companies, admitted to trading companies, banks, insurance companies etc.