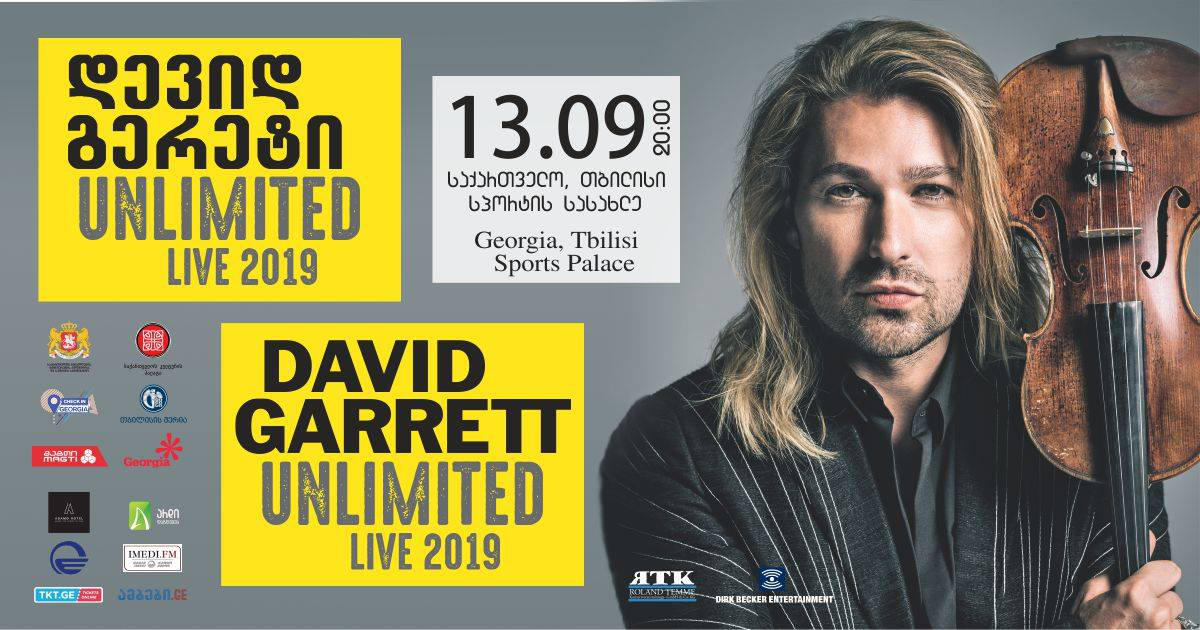 With his new tour “UNLIMITED –LIVE” David Garrett will be celebrating his 10 year crossover anniversary together with his fans.

“UNLIMITED” – David Garrett’s new tour is a promise: It’s purely about music and a celebration with his fans! His spectacular new crossover program will bring him and his band for a concert to Tbilisi, Georgia on 13.09.2019.

From the beginning of his career DAVID GARRETT did not let musical limits confine him. Hence “UNLIMITED” is more than a tour title: It’s his personal philosophy in life. Anyone who knows DAVID GARRETT knows that his creativity is limitless and has been fascinating millions of fans for over ten years worldwide. With his passion for music he has succeeded not only in creating a completely new audience for crossover, but also for classical music.

„I tremendously look forward to the ‘UNLIMITED – LIVE’ tour 2019, and, more than ever, I want to take my fans on an exciting musical journey. Together with my band, my friends and fans, I want to celebrate music and the past ten years.”

There is hardly any other artist besides DAVID GARRETT who has committed himself to great music independent of genre barriers with such total and uncompromising perfectionism – and his worldwide success proves him right. There are no limits for him. With his ambition to break new ground musically again and again, he has succeeded in inspiring audiences across all generations.

In more than a decade of his international crossover career he outdid himself over and over again. Last but not least with his “EXPLOSIVE LIVE” world tour which will have sold more than 400.000 tickets in 20 countries by the end of its run in November 2018.

His “UNLIMITED” tour is a big thank you from DAVID GARRETT to all of his fans, but also to his team and everyone who has been a part of his journey and supported him these past ten years. Therefore he will perform some of his most popular songs from the past decade like “Smooth Criminal”, “Nothing Else Matters”, He’s a Pirate”, “Viva la Viva”, and “Thunderstruck”, additionally to new and newly arranged pieces. A special highlight will be some of his best songs performed unplugged for the first time – certain to deliver some of the most memorable moments of the program. “UNLIMITED” will also be a personal retrospective for this artist who has made history with his crossover music and has revolutionized the violin repertoire.

The new and newly arranged pieces will also be part of his upcoming best of album, “Unlimited – Greatest Hits”, to be release in October 2018 via Universal Music.

By inviting and organizing the Georgia Chamber of Culture. Ministry of Education, Science, Culture and Sport of Georgia is supported by the event; The insurance company "Ardi" is the supporter and official insurer of the event. The event is held in Cheсk in Georgia.

Tickets for the “UNLIMITED – LIVE” concert starting will go on sale on 23 MAY 2019 via WWW.TKT.GE