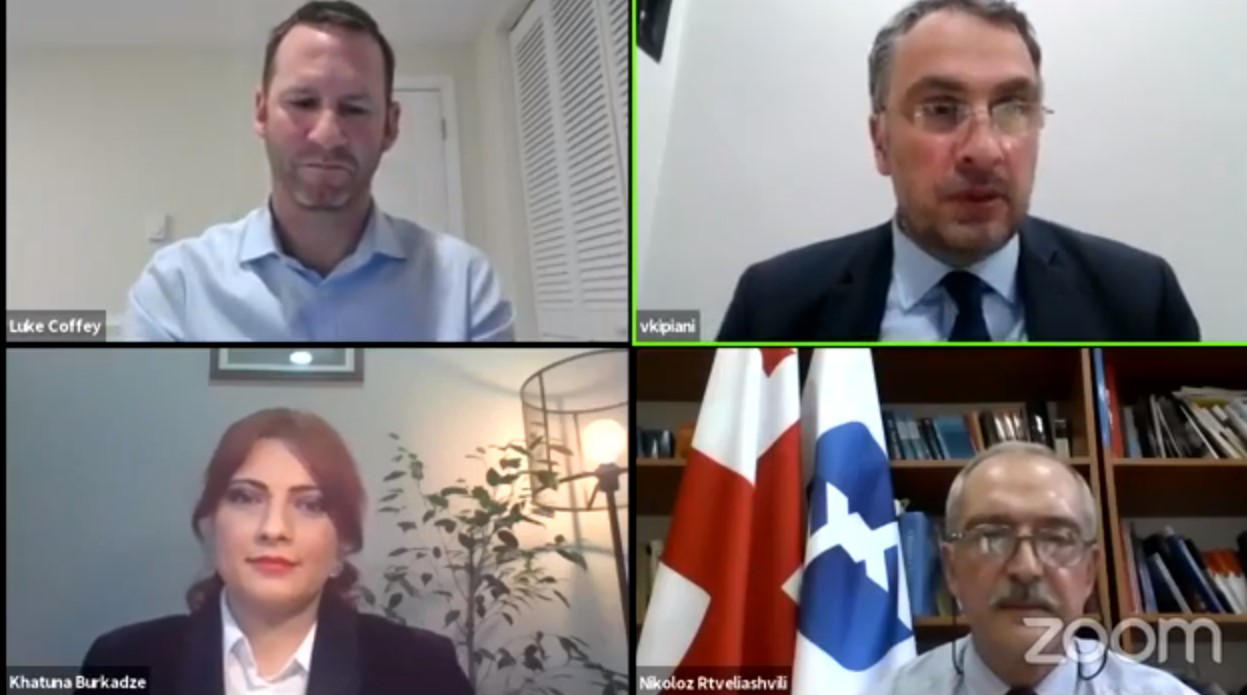 The topic of this online discussion was ‘Black Sea Security: Creative Thinking and Georgia’s Perspectives’.

The Chairman of Geocase, Mr Viktor Kipiani, stated that ongoing developments require fast and effective steps to be taken in order to strengthen the presence of our Western partners on the Black Sea.

‘It is vitally important to correct security imbalances along the Alliance’s eastern flank and to restore parity between the Baltic and Black Sea regions. Ongoing processes require that we rapidly take effective steps to strengthen the presence of our Western partners on the Black Sea according to a principle of “One Flank, One Threat, One Presence”. The specific characteristics of the Black Sea region must also be taken into consideration, and notably the ferocity with which different geopolitical interests are in confrontation. The region is of critical importance to Russia’s efforts to ensure strategic depth along her southern borders, and as a corridor towards the Mediterranean and North Africa,’ stated Mr Kipiani.

According to Mr Kipiani, the Black Sea region is the lock of the Eastern European and Middle Eastern security: ‘Security in the Black Sea plays a role beyond the region’s borders, and acts as a kind of lock for Eastern European and Middle Eastern security. Also, China’s “One Belt, One Road” strategy will in the not-too-distant future add a new and important dimension to the Black Sea region, further complicating the task of ensuring a balance of power between the region’s different actors.’

The Director of the Douglas and Sarah Allison Center for Foreign Policy at The Heritage Foundation, Mr Luke Coffey argued that NATO’s naval presence in the Black Sea should be increased in order to strengthen the Alliance’s position in the region, and suggested establishing a Black Sea Security Centre in Georgia. It could be a model of the NATO Cooperative Cyber Defence Centre of Excellence in Tallinn. He also underlined the fact that many things have changed since the Bucharest Summit and that Georgia can continue its Euro-Atlantic integration process separately, ‘but we must help Georgia as well as Ukraine on their paths towards Euro-Atlantic integration,’ he added.

The President of Georgia, H.E. Salome Zourabichvili contributed to this online discussion, pointing out that she raised the idea of a centre of excellence in Batumi to NATO authorities 1 year ago—an initiative that she hopes will be carried out.

The Research Fellow at Geocase, Dr Khatuna Burkadze noted that Georgia’s integration into NATO can be accelerated and the twelve years promise of the Bucharest Summit should be delivered in the future. Ambassador Nikoloz Rtveliashvili emphasized the historic and modern aspects of security in the Black Sea region.