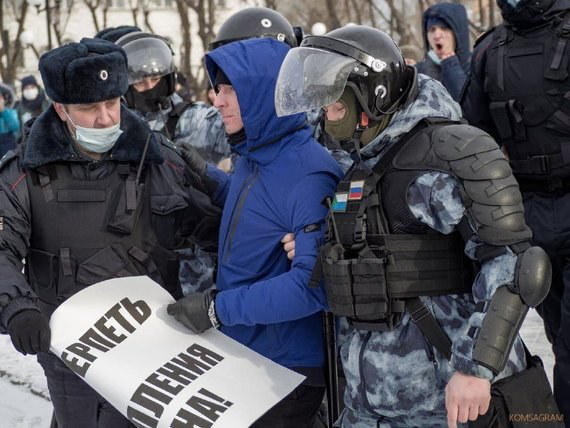 Protests have started in Russian cities demanding the release of opposition politician Alexei Navalny. According to the agency Meduza, riot police dispersed protesters in Vladivostok by force and arrested more than 20 people.

Protesters marched from Red Avenue to Lenin Square in Novosibirsk. According to Тайги.инфо, 8 protesters are detained in the city at the moment. The rally is also being held in the city of Ulan-Ude, where protesters are chanting "Freedom." There are reports of one person being arrested. As for the Russian capital, according to Meduza, the protest started in Moscow and law enforcement officers arrested a man holding a poster with the inscription: "I am not afraid!"

According to OVD-info, more than 125 people are currently detained across Russia.

A protest rally under the slogan "Freedom to Navalny!" is planned to be held in 93 Russian cities today.

Alexei Navalny, a Russian opposition politician returning to Moscow from Berlin, was arrested at the airport on January 17. The next day, the court sentenced Navalny to 30 days in pre-trial detention. The Russian government has been accused of embezzling funds belonging to Navalny, an organization he founded, the Anti-Corruption Fund.