Salome Zourabichvili: We do not have an alternative to close cooperation with Europe and our place is "undoubtedly in the European bloc" 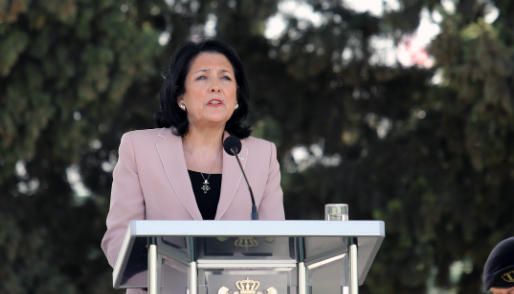 May 26 is a symbol of the unity achieved by our unity, the outcome of which is independence. Today, as never before, we need to believe in our own capabilities and future in order to enter a new world and face new challenges, - President Salome Zourabichvili said while speaking at the event marking the 102nd anniversary of the restoration of Georgia's independence at the Vaziani military base.

According to her, we do not have an alternative to close cooperation with Europe and our place is "undoubtedly in the European bloc."

"In the new world, Europe faces great challenges and a new phase of solidarity. It becomes even clearer to us that we have no alternative to working closely with Europe and our place tomorrow is undoubtedly in the European bloc, no matter of how it changes. At the same time, our strategic partnership with the United States is gaining new importance, becoming more diverse.

As it has turned out in recent months, in addition to military challenges, we are facing new global threats, which requires the expansion of cooperation and the example of this is the Lugar Center and our scientific relations, "- said Salome Zourabichvili.

She added that Georgia should maintain its identity on the new geopolitical map, and we should pay more attention to our culture and biodiversity.