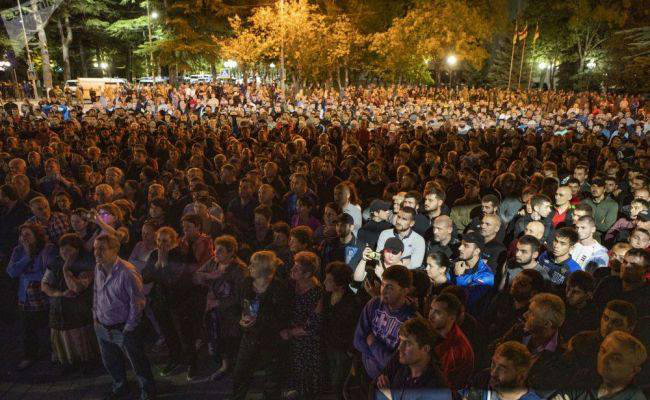 A protest rally lasted overnight near the so-called government house in occupied Tskhinvali.

Relatives of 28-year-old Inal Jabiev, who was allegedly tortured to death in the Tskhinvali police isolator, resumed gathering again in front of the administration house last night after the funeral of the deceased. Jabiev's relatives and friends were joined by civil activists and representatives of opposition parties.

Protesters had been chanting - “Step down” and "Punish the murderers of Inal Jabiev" for several hours. Various groups of protesters tried to invade the de facto administration building several times.

Representatives of the opposition parties demanded the resignation of de facto president Anatoly Bibilov and so-called prosecutor general two days ago, as well as radical reforms in the law enforcement agencies and strict punishment of those involved in the assassination of Inal Jabiev.

28-year-old Inal Jabiev was arrested by the so-called special service on charges of attempting to assault the so-called minister of internal affairs on August 26, when the region was celebrating "independence day". According to the reports, Jabiev had been tortured in the Tskhinvali police isolator for two days, which became the cause of his death. The situation further escalated after the photos of the deceased were spread on the social network. The photos showed that Jabiev had multiple injuries on his body.