Giorgi Gakharia: On behalf of every Georgian citizen, I call on the international community to adequately assess Russia’s illegal actions so that we may force it to fulfill assumed obligations 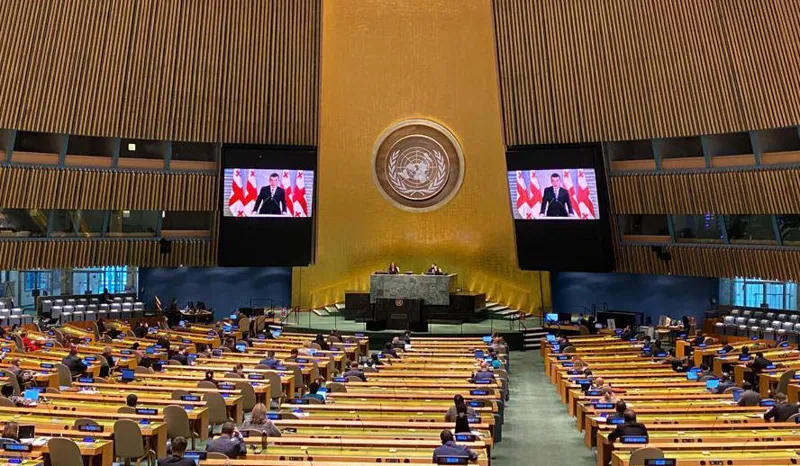 On behalf of every Georgian citizen, I call on the international community to adequately assess Russia’s illegal actions so that we, through our joint efforts, may force it to comply with international norms and fulfill assumed obligations, including the August 12 agreement, - Giorgi Gakharia, Prime Minister of Georgia, said in his speech delivered at the 74th session of the UN General Assembly.

“We urge Russia to adopt a constructive position within the framework of the Geneva International Discussions, where, with the participation of the UN, OSCE, the European Union, and the United States of America, we discuss the security and humanitarian issues related to Abkhazia and the Tskhinvali Region, such as Russia’s non-use of force against Georgia, the withdrawal of troops, the creation of international security mechanisms, and the return of IDPs and refugees to their homes.

For their part, Georgia’s authorities are sparing no effort to assist their fellow citizens in need as much as it is possible, even under the conditions of closed occupation lines.

The policy chosen by the Government of Georgia seeks to achieve peace through dialogue and resolve the conflict peacefully. This involves ensuring the implementation of the August 12, 2008 Ceasefire Agreement on the one hand, and reconciliation, confidence-building, and restoration of relations between the war-torn communities on the other.

The Georgian Government’s peace initiative A Step to a Better Future clearly demonstrates that Georgia is interested in dialogue with the residents of Abkhazia and Tskhinvali regions. We are concerned about their fate, and we take an interest in improving the social and economic conditions on the ground, as well as in restoring direct ties between the communities on either side of the boundary line. Our goal is to develop said regions and improve the living conditions of their residents, to share with them every benefit and achievement available to us, including life in a peaceful, free, democratic, and corruption-free society as well as the opportunities offered by our ever closer relations with the European Union, such as free trade and visa-free travel.

I address our fellow citizens on the other side of the occupation lines: Georgia is willing and able to share all this with you. Together, we can secure a better future for you and your children, while also preserving the unique culture and identity constituting our common heritage.

At this point, I would like to express deep gratitude to all our partners and friends for continuously standing by our side, for supporting Georgia’s sovereignty, territorial integrity, and the policy of non-recognition.

It is important to us that just a few weeks ago, under the conditions of the global pandemic, an unprecedented number of countries voiced support for the humanitarian resolution initiated by Georgia and 54 states concerning the status of internally displaced persons and refugees from Abkhazia, Georgia, and the Tskhinvali region/South Ossetia, Georgia, which confirms their right to a dignified return to their ancestral homes”, said the PM.