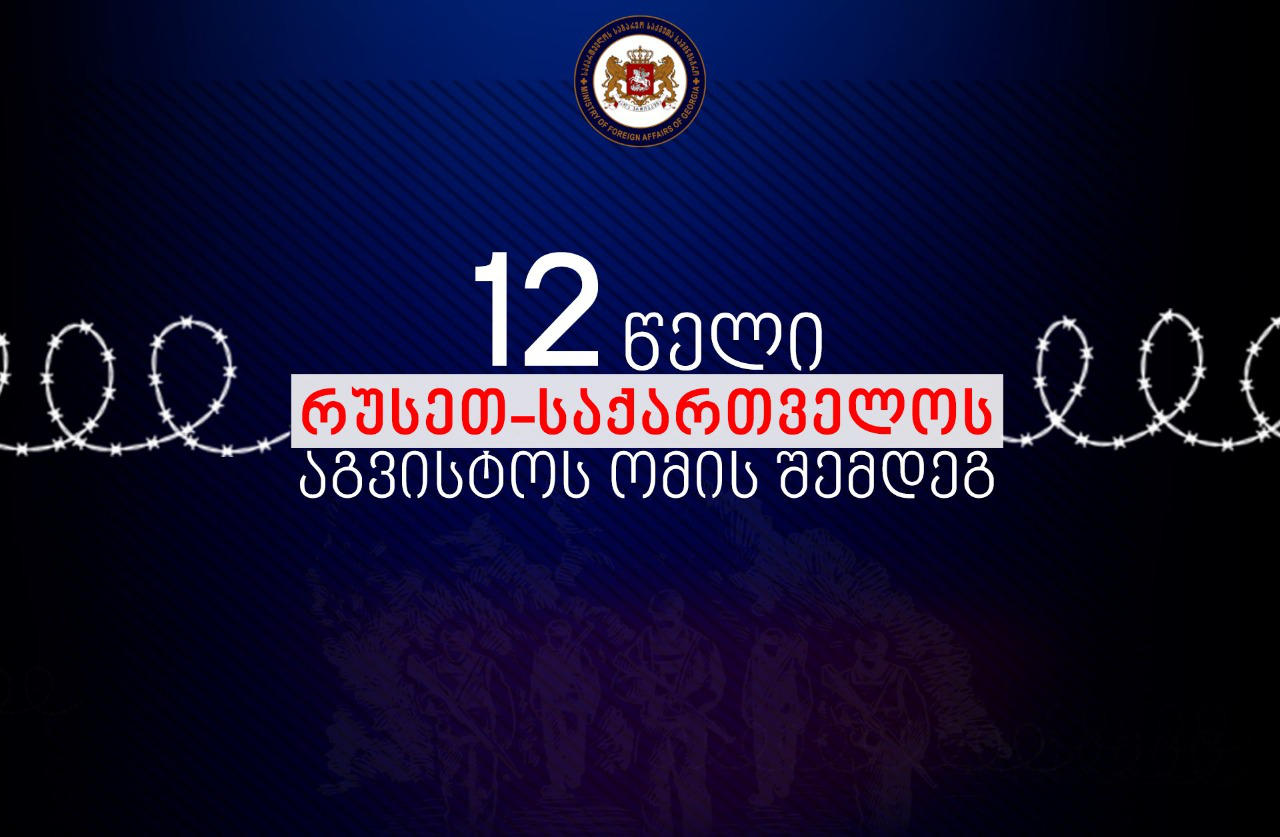 12 years have passed since Russia’s large-scale military aggression against Georgia in August 2008 and the subsequent illegal occupation of Georgia’s indivisible regions of Abkhazia and Tskhinvali region/South Ossetia, - reads the Statement by the Ministry of Foreign Affairs of Georgia on the 12th anniversary of the August 2008 Russia-Georgia War.

"This illegal attempt to forcibly redraw sovereign borders in Europe was a blatant violation of the fundamental norms and principles of international law, which has seriously undermined the rules-based international system and endangered the entire European security.

12 years after the August war, the Russian Federation still refuses to implement the EU-mediated 12 August 2008 Ceasefire Agreement and to withdraw its occupation forces from Georgia’s territory. Moreover, the Russian Federation intensifies the illegal militarization of Georgia’s occupied regions and takes steps towards their de-facto annexation. It is particularly concerning that the fortification of the occupation line with barbed wire fences and different artificial barriers has become a daily practice, which has been accompanied with illegal detentions and kidnappings of the local population.

While the entire world has been fighting the negative consequences of the global COVID-19 pandemic, the Russian Federation has not ceased its provocative actions and has been actively using the hybrid warfare tools against Georgia. It is worrisome that along with Richard Lugar public health laboratory of Georgia, the EU Monitoring Mission has also become a target of Russia’s disinformation attacks. Furthermore, amid the UN General Secretary’s call for an immediate Global Ceasefire, the occupation forces have not refrained to shoot and wound the peaceful local civilian – Zaza Gakheladze, who remains in the illegal custody.

The gross violations of the fundamental human rights, ethnic discrimination and infringement of right of hundreds of thousands of internally displaced persons and refugees to return to their homes still remain a heavy humanitarian burden of the Russian illegal occupation. At the same time, the impunity on the cases of deprivation of lives of D. Basharuli, G. Otkhozoria and A. Tatunashvili further increases the threat of ethnically driven violence. Against this background, it is concerning that the occupying power has been further impeding the unrestricted access of international human rights organizations and deployment of international security mechanisms on the ground, as well as the entree of the EU Monitoring Mission to Abkhazia and Tskhinvali Regions.

Despite the severe security and humanitarian challenges, peace and sustainable development of the country is a well-considered choice of the Government and people of Georgia. Georgia is unwaveringly pursuing the policy of the peaceful conflict resolution, in an attempt to de-occupy the country and resolve the Russia-Georgian conflict by using the diplomatic and legal instruments at its disposal. The implementation of the initiative "A Step to a Better Future" is another vivid example of the Georgian Government’s peaceful efforts, aiming at improving the living conditions of the people in Abkhazia and Tskhinvali regions and supporting reconciliation and confidence building between the communities divided by the occupation line.

Georgia values the unwavering support of the international community for its sovereignty and territorial integrity and highly appreciates the international partners’ contribution to the peaceful resolution of the Russia-Georgia conflict.The Ministry of Foreign Affairs of Georgia calls upon the Russian Federation to cease its illegal and provocative steps against Georgia, fulfil its obligations undertaken vis-à-vis the EU under the 12 August 2008 Ceasefire Agreement, withdraw its forces from Georgia’s territory and reverse its illegal decision on recognition of the so-called independence of Georgia’s occupied regions.

The Ministry of Foreign Affairs of Georgia appeals to the international community to direct its consolidated efforts to ensure the de-occupation of Georgia’s territories and return of all IDPs and refugees to their homes, and take effective steps to facilitate peace and security in Georgia and Eastern Europe.

The Ministry of Foreign Affairs would like to use this opportunity and extend its deepest condolences to the families and relatives of the civilians and the soldiers who died heroically during the 2008 war", - reads the full statement.