UK and France in agreement over Ukraine support 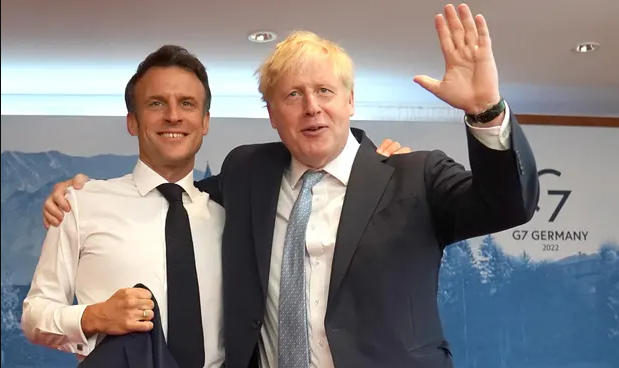 Boris Johnson and Emmanuel Macron agree the conflict in Ukraine is at a critical moment, with an "opportunity to turn the tide in the war", Downing Street says.

In a summary of a meeting between the UK PM and French president at the G7 summit, No 10 says they both "stressed the need to support Ukraine to strengthen their hand in both the war and any future negotiations".

“President Macron praised the prime minister's ongoing military support to Ukraine and the leaders agreed to step up this work. The prime minister stressed any attempt to settle the conflict now will only cause enduring instability and give Putin licence to manipulate both sovereign countries and international markets in perpetuity.

"The leaders agreed to continue and enhance the close work between the UK and France on areas including defence and security."

Macron's office says the talks were good, and that Johnson showed enthusiasm for joining a "European political community" – an initiative suggested by the French leader for a decision-making structure that would involve EU nations and European countries that are not members.